The Restaurant LALIQUE at Château Lafaurie-Peyraguey is entering its fifth season and a new pastry chef, Héloïse Château, has just taken her first steps in the kitchen of the Michelin-starred restaurant under the direction of chef Jérôme Schilling.

With a surname like hers, it would be easy to believe that the new pastry chef of the Restaurant LALIQUE was predestined to work in a castle steeped in more than 400 years of history. Located in the heart of the terroir of the premier grands crus classés of Sauternes, Château Lafaurie-Peyraguey is the new setting for Héloïse Château.

Since childhood, Héloïse has had her hands in pastry. Her rigorous educational background (Bac Pro in cooking and CAP in pastry with the Compagnons du Devoir) gives her the opportunity to embark on the deep end of catering in 2013. After an early career that took her from Poitiers to Bordeaux via Nîmes, Héloïse has just won the bronze medal at the 2021 French dessert championship.

Héloïse Château describes her pastry as instinctive. She loves to innovate and create new desserts. Héloïse recently discovered the Lalique universe of Château Lafaurie-Peyraguey, which has already given her ideas for her first creations.

“For me, working in a new universe like the one offered by Lalique at Château Lafaurie-Peyraguey is a challenge. We can create new desserts based on different themes. Whether it’s with crystal, the vineyard or even Lalique candles, as I was able to do with my first dessert. I have a lot of ideas flying around. I am very happy. Everything is fine. It’s a bit like the continuity of my journey and everything I wanted to do. »

Passionate about herbs, the pastry chef is preparing to amaze the customers of the LALIQUE Restaurant with her original creations.

“I don’t really have a specialty because I work a lot on instinct. I really like to make unusual and improbable associations. I particularly like to associate my desserts with plants and herbs or even sometimes vegetables. »

Driven by a strong competitive spirit, Héloïse Château will very soon try again the competition for the French dessert championship to win it. There is no doubt that at Restaurant LALIQUE, she has found a house worthy of her ambitions! 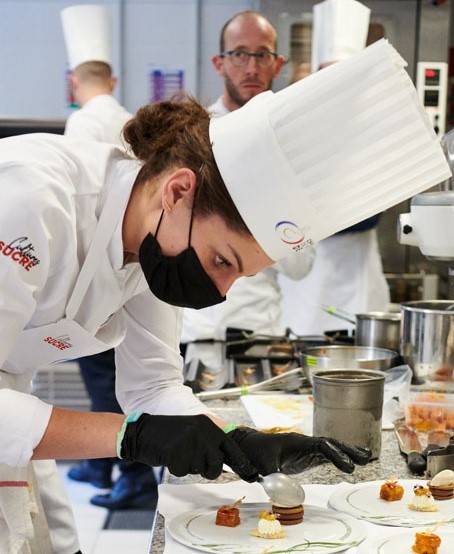 The truffles of Guillaume Gé in the spotlight on the menu